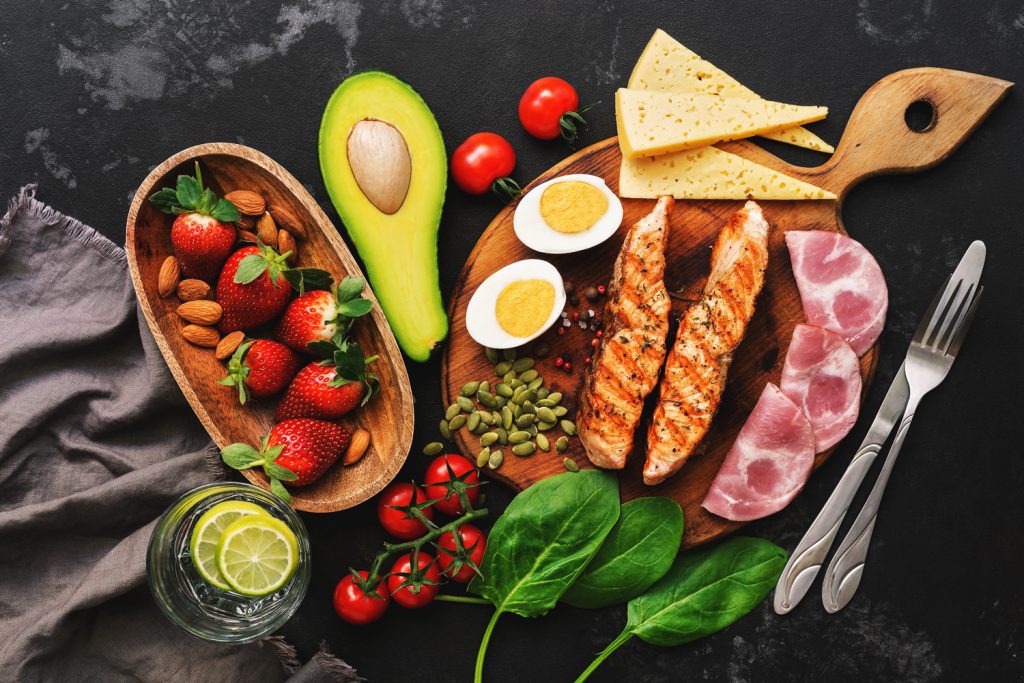 With the growing popularity of lower and low-carbohydrate diets for weight reduction, many health care providers and people with diabetes began to question the sensibility of recommending and following, respectively, eating plans with 50% or more of calories from carbohydrate. Not only did a higher-carbohydrate eating plan require more diabetes medication (including insulin), but also evidence suggested that the amount and type of carbohydrate consumed could adversely affect heart health. The rise of a host of lower-carb eating plans gained momentum in both the medical community and the diabetes community: Dr. Atkins, The Zone Diet and The South Beach Diet grew in popularity. Today, the top contenders for low-carbohydrate eating include the Paleo diet and the Ketogenic (Keto) diet.

Carbohydrates (carbs for short) seem to become more maligned every day. And not just for people who have diabetes. Feeling tired and draggy? Feeling blue? Have a stomachache? Gaining weight? Blame carbs. Websites such as lowcarbyum.com and lowcarbmaven.com and books like “Wheat Belly” and “Grain Brain” are dedicated to slashing carbs and make it appear simple to get started. These diets can indeed be beneficial in helping people drop body weight and blood glucose levels at the same time. Researchers have been taking a closer look at these eating plans as well, with more and more studies in support of the “low-carb” movement. And what about the American Diabetes Association (ADA)? Often wrongly blamed for promoting high-carb eating, the ADA nutrition recommendations, recently updated in May of 20191, clearly state that there is no ideal percentage of calories from carbohydrate, protein and fat for all people with diabetes. The 2019 ADA Standards of Medical Care in Diabetes2 state: “Macronutrient distribution should be based on an individualized assessment of current eating patterns, preferences, and metabolic goals.” A variety of eating patterns—including lower-carb—are acceptable for managing diabetes. Yet despite the growing acceptance of lower-carb eating plans, misconceptions about them still abound. Let’s take a look at some common low-carb questions that your patients may ask you, along with suggested answers.

Claim: All carbs are bad. Period.

False. Thinking that every carb food is “bad” is a very misinformed and dangerous assumption. Plus, falling into the “good food/bad food” mentality can make it hard to eat healthfully. The fact is, almost all foods have their high and low points. Even something as seemingly unhealthy as, say, McDonald’s Double Bacon Smokehouse Burger, with 1,130 calories, 64 grams of carb and 1,920 milligrams of sodium, has some merits (protein, vitamin B12, iron).
Are some carb foods not so healthy? Sure. Cookies, candy, cake and soda are a few examples. On the flip side, there are plenty of carb foods that are highly nutritious, such as sweet potatoes, quinoa, black beans and raspberries. Refined carbs (e.g., cookies, cake, soda, white bread, white pasta) are the types of carbs to limit, whereas unrefined carb foods, such as vegetables, fruit, whole grains and legumes, are good bets. The goal is to help patients focus on including “quality” carb foods in their eating plans – these are foods that are rich in fiber, vitamins and minerals, and low in added sugars, fats and sodium.1

True. If one is carrying extra weight and a health goal is to lose a few (or a lot of) pounds a low carb diet may help. For overweight individuals, data show that losing between 5 and 10% of body weight can lead to a number of benefits, including a lower hemoglobin A1c (A1C), decreased insulin resistance, lower blood pressure, lower blood lipids and improved sleep apnea, not to mention improved quality of life.

One of the misconceptions about lower-carb eating plans is that they are better for weight loss than a higher-carb plan. In the short term, maybe. Yet research shows that over time, this may not be true. The POUNDS LOST study3 for example, tested four diets that varied in carb, protein and fat. There were 811 participants in this study, who were assigned one of four diets to follow. After six months and two years, respectively, weight loss was similar. Furthermore, all four diets showed an improvement in cardiovascular risk factors, such as cholesterol, triglycerides and blood pressure. A more recent study, the DIETFITS trial4, randomized 609 adults to follow a low-carb or a low-fat diet. After one year, there was no significant difference in the amount of weight loss between the two groups.

What many healthcare professionals and patients don’t realize is that going low-carb isn’t the only way to lose weight: evidence points to other eating patterns, such as Mediterranean-style, vegetarian/vegan, low-fat and DASH (Dietary Approaches to Stop Hypertension) eating patterns as helping to promote weight loss, if warranted, and then supporting weight maintenance once the desired weight goal is achieved.1

According to Melinda Maryniuk, a nationally recognized registered dietitian nutritionist (RDN) and certified diabetes educator, “The usual limiting factor for achieving success with a low-carb diet is that people tire of the limited food choices. If your patients feel like they can stay with a low-carb eating plan over time (and have family support), try it and see how it works.”

Claim: Carb foods are off limits on a low-carb diet.

False. A low-carb diet doesn’t necessarily mean a no-carb diet, nor would it be simple to cut out all carbs from an eating plan, although it is definitely possible. There are a number of versions of low-carb diets out there. Some of the more popular include:

• Zero-Carb Diet: No fruits, vegetables or starches — just meat, poultry, eggs and cheese. And water.
• Ketogenic (Keto) Diet: Less than 50 grams of carb per day; heavy on fats and protein foods, with limited amounts of fruit.
• Atkins Diet: Starts with a very-low-carb plan, and then gradually adds back carbs.
• South Beach Diet: Like other plans, this is also higher in lean protein and fat, with different phases whereby healthy carbs are added back.

Unfortunately, there is no universally accepted definition of a low-carb diet, which can cause confusion. What may be low-carb to you can seem like way too much carb for someone else. Health care providers may recommend a low-carb diet to help manage diabetes or weight loss goals without specifying what the diet should involve. Feinman and colleagues5 attempted to set some parameters around the meaning of “low carb” by proposing the following definitions:

True. The ADA actually is supportive of many different types of eating patterns, including Mediterranean, DASH (Dietary Approaches to Stop Hypertension), lower fat, vegetarian, use of meal replacements and yes, lower carb. In fact, ADA’s Standards of Medical Care in Diabetes, released every year in January, acknowledge (and have for several years now) that low-carb eating plans (less than 50 grams/day) are linked with improved outcomes for three to four months. More recent research indicates that these outcomes may extend for at least a year. It is important to note that no single meal planning approach has been proven to be “consistently superior,” with more research needed to determine the optimal type of eating pattern for people with diabetes.

Is a lower-carb eating plan a good choice?

Help your patients avoid getting caught up in the low-carb hype that is rampant across the internet and the office water cooler. There is certainly some merit to cutting carbs, especially because going lower-carb can help improve glycemic control and make it easier to get and keep A1C and blood glucose levels within target range. In some cases, decreases in the amount of diabetes medication may occur as well.6 In fact, ADA’s recent nutrition recommendations clearly state that, “for select adults with type 2 diabetes not meeting glycemic targets or where reducing antihyperglycemic medications is a priority, reducing overall carbohydrate intake with low- or very-low carbohydrate eating plans is a viable approach.1

In contrast, eating patterns that are moderate carb, such as Mediterranean style and a lower-glycemic approach (think whole grains, a lot of vegetables, lean protein) can also help people with diabetes achieve their glycemic goals.

1. What foods might you have to give up (or, at least, drastically cut back on)? Are you willing to do this? How will going lower carb impact your spouse, partner or family?

2. Is this a plan that you will stick with for the long term? If you want to try a low-carb approach to give you a jump start, make sure you have a plan to move to a healthy eating plan longer-term.

3. Are there any risks of following a lower-carb plan? (Risks can include having kidney disease or osteoporosis.)

4. Have you talked with your health care provider about going lower carb? If you go lower carb, do you know how to adjust your insulin or other diabetes medicine, if necessary?

Going low carb isn’t for everyone; however, controlling carb intake is important with diabetes. Because carbohydrate requirements can vary from person to person, refer your patients to an RDN to discuss carb goals. Until then, the following can be helpful to get your patient started:

All patients with diabetes should be actively engaged in ongoing education, self-management of diabetes, and treatment planning with the diabetes care team. Collaboration with the RDN for medical nutrition therapy (MNT) to determine a dietary plan for diabetes is an essential part of care.1 MNT is associated with decreases in A1C of 1.0 to 1.9% in type 1 diabetes and 0.3 to 2.0% in type 2 diabetes.7 Take action to refer patients to a RDN, ideally one who specializes in diabetes and weight management, for an individualized dietary meal pattern and to get questions answered.