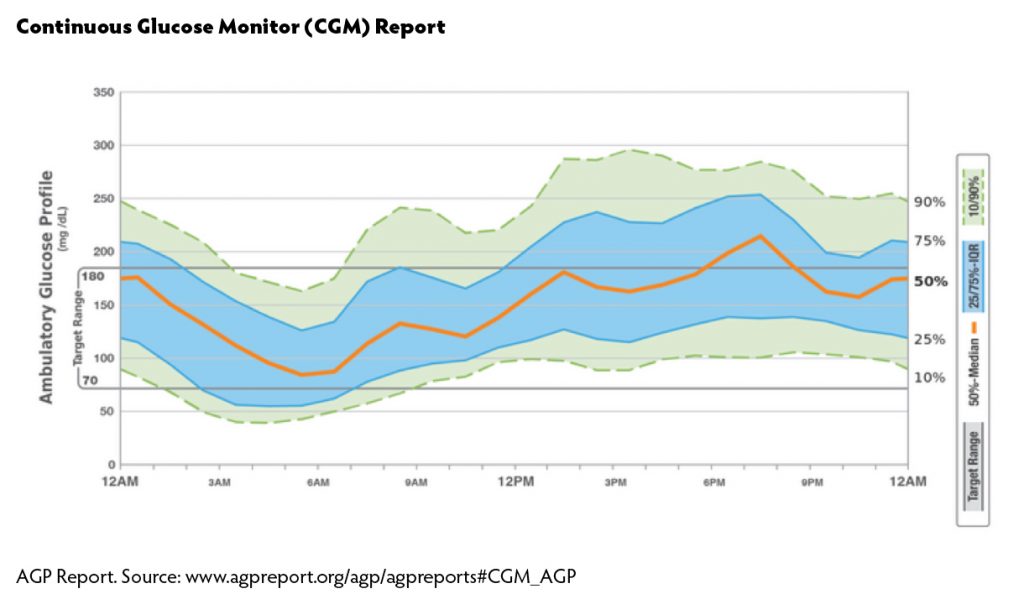 Some of you might have noticed that the term “estimated A1c (eA1c)” has disappeared from reports obtained by continuous glucose monitoring (CGM) devices. Have you wondered why? What happened? Simply put, the U.S. Food and Drug Administration (FDA) felt that the term “eA1c” might be confusing and misleading for both practitioners and patients. Recall that the eA1c on the CGM reports was calculated from the interstitial glucose values derived by the devices (either in five- or 15-minute intervals, depending on the device) for the duration of its wear (could be as short as three or as long as 14 days). As it turns out, the mean glucose value obtained by CGM over at least a 10- to 14-day period represents a reasonable estimate of a three-month mean blood glucose concentration.2 Thus, a recommendation was made to the device manufacturers to include such an estimated value (called “eA1c”) to assist clinicians in determining whether the patients’ glycemic control meets the mutually agreed-upon targets.3

The problem arose, however, when a laboratory- or point-of-care-measured HbA1c disagreed significantly with the eA1c on the CGM reports. Once you understand how these values are derived (hemoglobin A1c [HbA1c] is a measured percentage of total hemoglobin within erythrocytes, which has glucose molecules covalently bound to it, while “eA1c” is calculated from a formula itself based on an old study that attempted to correlate mean blood glucose from several daily fingersticks with measured HbA1c), you can easily think of the many reasons for possible discrepancy between the values. Just think of a patient wearing a CGM device while he/she has an infection or is on corticosteroid therapy or on a weeklong cruise or on some short-term, very calorie-restricted diet, etc., which would not represent a typical three-month period of their lives. Further, it has been recognized for a long time that any given measured HbA1c can result from very different mean blood glucose values. In the Diabetes Care paper, we gave an example of a laboratory-measured HbA1c of 8 percent, which the formula states can correspond to mean glucose concentration as low as 155 mg/dl or as high as 218 mg/dl. One can see that such different mean glucose values, when determined from CGM data, would yield very different “eA1c”. So, in a clinical setting, facing a confused and possibly frustrated patient, how do you decide which value is “correct”? What if the “wrong” value is used by the practitioner to make a clinical decision (e.g., if eA1c is erroneously indicating significant hyperglycemia and doses of antihyperglycemic medications are increased or a new drug prescribed?)

The Center for Devices and Radiological Health, a part of the FDA that regulates medical devices, stepped into the fray and expressed its concern about this possibly confusing situation. It felt that the term eA1c can lead possibly to inappropriate decisions potentially affecting patients’ wellbeing. What followed was a lengthy but exemplary period in which many stakeholders (including diabetes specialists, patents with diabetes, diabetes advocacy groups, laboratory experts and CGM device manufacturers) in the diabetes space were involved to replace the term eA1c with another one that would address the FDA’s concern and still allow practitioners and patients to benefit from the useful data obtained by their CGM devices. The FDA preferred that any new term would not include “A1c” in it but rather clearly called out the fact it reflected a value calculated from the actual measured data (i.e., glucose). In the end, “glucose management indicator” (GMI) was agreed upon by the diabetes community, and the FDA in its comment agreed with the new term.4

GMI gives you and your patients a general idea of what a measured HbA1c would be, based on CGM metrics obtained during the wear time of a CGM device. As pointed out above, there might be easily explainable scenarios based on a short wear time when GMI would be significantly higher (i.e., severe illness, corticosteroid therapy, etc.) or lower (very low carbohydrate diet, after starting a new antihyperglycemic agent, etc.) than measured HbA1c. However, if a patient consistently exhibits higher GMI than measured HbA1c and no such explainable situation is determined, that might change the agreed-upon HbA1c target for that patient. For example, consistently lower GMI than measured HbA1c might indicate more time spent in hypoglycemia and lead to a higher HbA1c target. The opposite situation would be if GMI is always higher than measured HbA1c; i.e., more time being spent in hyperglycemia and perhaps leading to a lower HbA1c target.

How is the GMI value derived?

If you don’t want to calculate it yourself, just go to the website jaeb.org/gmi and plug in the mean glucose value from the CGM device (it should reflect at least 10 days’ worth of glucose data).

What do I do with it in my practice?

We all recognize the value of the time-tested HbA1c as a useful yardstick of success of diabetes management of our patients. HbA1c, on a population scale, correlates with some of the long-term diabetic complications. However, the advent of modern continuous glucose monitoring made it obvious to both patients and practitioners that knowing the HbA1c value of an individual person does not help us in making useful or safe changes in that particular patient’s antihyperglycemic regimen. That, of course, applies mainly to those on insulin therapy, for whom time spent in hypoglycemia is far more relevant in their daily lives than the HbA1c value. As we gather more experience with glucometrics derived from CGM (rather than the traditional infrequent fingersticks), we will be able to fine-tune specific advice to specific individuals under our care. Introduction of GMI constitutes the first step in that direction. Once incorporated into the standardized CGM device reports, it will allow both clinicians and patients to get a better idea of trends in their glycemic management over a shorter time frame than the laboratory-measured HbA1c and hopefully lead to more informed, safer changes in their regimens.

Chairman of Grundberger Institute in Bloomfield Hills, Michigan, clinical professor of medicine at Wayne State University in Detroit, Michigan and Oakland University in Rochester Hill, Michigan, and visiting professor at Charles University in Prague, Czech Republic. Dr. Grunberger is past president of the American Association of Clinical Endocrinologists.