Skip to content
Diabetes Self-Management > Healthy Living > S. Epatha Merkerson On Living With and Learning About Diabetes
Share This:

Tony- and Emmy-nominated actress S. Epatha Merkerson is just like the rest of us. She’s human this time of year. “I’m not going to tell you that I don’t falter when it comes to staying on track during the holidays,” she admits, “but I’ve learned not to beat myself up.”

It’s a refreshingly real perspective from someone in the public eye who has lived with type 2 diabetes for more than a decade. “It’s a struggle, but fortunately, I’ve been able to keep my A1C below 7%, I’ve lost weight, and I’ve changed my diet, and for exercise, I like to walk,” she says. “New York and Chicago are great cities for walking!”

She’s best known for her ties to those two cities — first, portraying no-nonsense Lt. Anita Van Buren on NYC-set drama Law & Order, a role she played for 17 years, and now appearing as a hospital executive on NBC drama Chicago Med (which, like Law & Order, is produced by Dick Wolf).

Merkerson also recently narrated a documentary that aired on PBS. With a family history of diabetes and a desire to assist others in learning more about it, the actress was thrilled at the chance to highlight people living with the disease and confront the often ugly stigmas that can accompany a diabetes diagnosis.

The film, titled Blood Sugar Rising, examines the “rapid rise” in diabetes diagnoses and explores why, despite the severity of the epidemic, the condition often doesn’t get a lot of media attention. It challenges viewers to “rethink the environments we live in that fuel diabetes’ growth.”

Shortly after Rising debuted, Merkerson spoke to Diabetes Self-Management about self-care during quarantine, how she monitors her diabetes, and her family’s history with the condition.

Diabetes Self-Management: Why is it important for people to learn more about the severity of the diabetes epidemic?

S. Epatha Merkerson: The answer is actually built into in your question by the use of the word “epidemic.” The statistics show that diabetes affects a large number of our population, upwards of 30 million Americans, and that number is said to be rising.

DSM: What role does awareness play in fighting the diabetes epidemic, especially among African-American communities?

Merkerson: My mother used to say to all of us (I’m the last of five), “When you know better, you can do better.” Blood Sugar Rising is a comprehensive look at diabetes. It covers the history and the statistics. There is an illustration of exactly what happens to the pancreas and the kidneys. It explains the difference between type 1 and type 2. There are testimonies from people who are living with the disease. You hear from physicians at the forefront of diagnosis and research, doctors and researchers speaking on the issues and the advances that have been made. With over 30 million Americans suffering from diabetes, Blood Sugar Rising is important and timely.

DSM: How did you get involved with this film? What about it spoke to you and made you want to be part of it?

Merkerson: Being diabetic, I have a keen interest in the subject matter, and I have a significant track record in the advocacy of diabetes education and prevention.

DSM: What did you learn from narrating this film?

Merkerson: With all the work that I’ve done with diabetes education, I must admit I’d never heard the term “dead in bed syndrome” [which refers to sudden deaths of young people with type 1 diabetes]. It may be that I have always had to deal with issues of high blood sugars. I was also pleased to learn more about the history of the disease.

DSM: Do you talk about your diabetes a lot in your day-to-day life? Is it something you discuss with family/ friends, and does it come up when fans approach you?

Merkerson: Diabetes has affected members on both sides of my family. My father died at 57 from complications of type 2. My maternal grandmother lost her sight as a result of the disease; an uncle had lower-extremity amputations due to uncontrolled glucose levels. One of my brothers suffers from type 2, and yet there was never any conversation in our family aside from the phrase “a touch of sugar.” I never really understood what a “touch of sugar” meant, but I saw the results. Now, we have healthy discussions about A1C, dietary issues and exercise. Fans who know that I am diabetic will ask questions or share stories about their struggle or about a family member dealing with the disease.

DSM: Do you feel a stigma from living with diabetes? Why or why not, and if so, how do you deal with it?

Merkerson: I don’t personally feel a stigma, but I understand that there is the idea that those of us who suffer from the disease are somehow at fault and could’ve prevented it. Poor diet, lack of exercise and being overweight can lead to diabetes, but there are other variables that can [increase risk of the condition], like genetics, environment and access to decent health care.

DSM: How do you manage your diabetes (i.e., do you have a CGM, do you use other technology, etc.)?

Merkerson: I use a blood glucose meter twice a day.

DSM: How do you monitor your diabetes on the set of Chicago Med?

Merkerson: There are so many pitfalls on a set. With a constant flow of food and snacks, I don’t always succeed, but the caterers know that I’m diabetic, so they are extremely helpful, providing food that won’t spike my blood sugar levels.

DSM: We’re speaking a couple of months into the COVID-19 pandemic. Has anything changed with your diabetes during this social distancing/ quarantine period?

Merkerson: No, I still finger-prick twice a day, and we’ve been good about trying to maintain scheduled meals. I have listened to the directives, and I realize that people with diabetes are at risk. I am also over 65, so I’ve made masks for us, and since the quarantine, I have only been out of the house twice, for medication and for groceries.

Want to learn about other celebrities living with type 2 diabetes? Read our interviews with James Earl Jones, Anthony Anderson and Mike Golic. 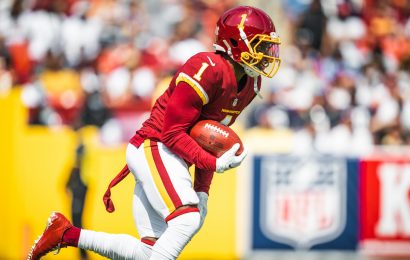 Jumping from youth football to the high school game can be challenging. But for DeAndre Carter, the transition felt especially rough…