Learn more about people and organizations making a difference in the diabetes world — and find inspiration to create positive change in your local diabetes community — in our periodic profiles of projects that are having an impact.

Objective: Diabetes Abroad provides resources to people with Type 1 diabetes who are in college and traveling for the first time. The group is also developing resources for traveling families with a member who has Type 1.

Introduction: Founder Erik Douds wanted to remove the fear of the unknown for people traveling with diabetes, and he wants readers to learn from his mistakes and see that there are others out there having adventures while managing diabetes. And so, on World Diabetes Day 2016, Diabetes Abroad was formed.

Erik, who himself has Type 1 diabetes, said the idea stemmed from studying abroad in Copenhagen, Denmark, for a semester. According to Erik, at the time, there were no in-depth resources for preparing for a trip like that. “I was like, ‘How am I going to prepare for six months [abroad]? What do people with diabetes actually do [in situations like this]?’”

He revealed how his group is working to fill this need when we caught up over coffee in New York City, close to Erik’s hometown.

KD: What role did your personal travel experiences play in leading you to create Diabetes Abroad?

ED: [After studying in Copenhagen], I ended up staying for an additional three months. And from there, it developed into more of the adventure side of travel: My background is in environmental policy, so I’ve been to Ethiopia, and all these different places in the world.

I spent five months on a bike going across the U.S. [last summer]. A few of my initial fears were, “Where do I go to the bathroom? Where do I get food? Where do I get water?” Then I get out there, and there’s gas stations, there’s grocery stores. The [reality is] completely different than what you actually expected.

KD: How did that trip compare to what you were anticipating?

ED: For the first three months, I had a travel partner who also had Type 1 diabetes, [so we always had backups of supplies]. For the last two months, I was by myself. Later in my journey, there was a day when I thought I had forgotten my meter at a lunch spot, and I figured, “No worries, I have a backup meter and test strips!” I started digging through my bag, and realized I had two meters, but neither of them used the brand of test strips I had on hand.

As a solo traveler, occasions like this make you realize, “Wow, I thought I was prepared!” That situation ended up being fine: I ultimately found my main meter underneath my camera, hidden. That’s why I really believe in preparing checklists and consulting with good resources, because there are so many things to remember.

KD: How is the “Explorer Team” involved in Diabetes Abroad?

ED: Tackling adventure topics in-depth is what our Explorer Team is doing right now: scuba diving, kayaking, stand-up paddle boarding, and so on. The team is made up of people who exemplify what it means to explore as a diabetic, sharing their stories.

We’re looking for those who are “out there” in their everyday lives to provide one photo per month in their given area of expertise and contribute content for the website. Check back for Explorer Team applications in 2018!

KD: How can people get involved with Diabetes Abroad?

ED: People who are not Explorers can contribute to the [map project]: We’re hoping to collect a photo from every country in the world and every state in the U.S. If people look on the travel map, they’ll see that there’s a way of adding a photo. That’s how I ask people to contribute: put one photo on the map. It can be your hometown. The real idea behind it is, how do you explore, even in your own neighborhood?

KD: What do you see happening over the next year for the organization?

ED: Connecting global diabetes communities is my main focus right now. How do I make it easy to contribute?

I think, for a lot of people, all they’re looking for is some sort of invitation to get involved. The World Diabetes Challenge competition launched recently, and that’s going to be a continual series. It’s a way to expand your comfort zone and get into other people’s worlds, and an invitation to anyone in the [diabetes] world to come share an experience with others who understand. Even if you’re setting aside just one hour a month for the project to focus on yourself and your diabetes, we can all use that.

Want to learn more about traveling with diabetes? Read “Traveling With Diabetes,” then see our interview with CNN’s Jerusalem correspondent Oren Liebermann, who traveled the world shortly after his diagnosis with Type 1 diabetes. 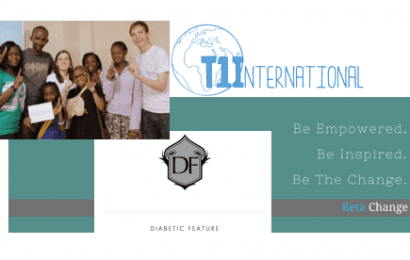 If you find yourself itching to make an impact in the diabetes sphere, this “Making a Difference in Diabetes” series will help you get started…